Matthias Haffner is a versatile and sought-after allround-percussionist based in Berlin / Germany. From 1996 until 2002, he studied

Latin Percussion at the conservatory in Rotterdam, the Netherlands (Codarts). He is specialised in Arabic, Brazilian and Cuban Percussion,

and developed a deep passion in particular for the pandeiro, the Brazilian frame drum. His career includes collaborations with

the Rotterdam Philharmonic Orchestra and the Choro school EPM in Rio de Janeiro.

Many study trips and tours brought him to Brazil, where he met the masters to learn from and to

Countless band projects, recordings and tours world-wide made him an experienced musician, always

looking for the right sounds, serving the music as ultimate goal.

Matthias Haffner and his colleague Michael de Miranda (NL) are authors of the book Blocos Afro in Salvador, self-published in 2019.

Music has a very special place in Brazil. In the federal state of Bahia and its pulsating capital Salvador, you can experience its vibes on the streets all year round. The music is abundant and lively, and it can be powerful! In this book, the reader will explore the rhythms of the the so-called bloco afro in detail. Africa, the Caribbean, Black Power, Candomblé - the percussion groups from Bahia use many elements to create innovative and energetic music. A book for all rhythm enthusiasts who want to get a closer look of the spirit of groups like Olodum, Ilê Aiyê or Muzenza.

Blocos Afro is one of the first books about the drumming culture from Bahia which was translated in several languages. The book is richly illustrated and contains many notation examples of popular as well as less well-known blocos from Salvador. The included CD (or audio file for download) makes all rhythm samples available in excellent quality. The authors, Matthias Haffner and Michael de Miranda are two passionate percussionists with a strong preference for Brazilian music. Their analytical and pedagogical skills made this book a valuable work of art for all musicians and music lovers.

The book is available as physical book including a cd (in English) and as download in PDF-format including all sound files in wav (English, German and Dutch language). You can order the book on our website  www.blocoafro.com. 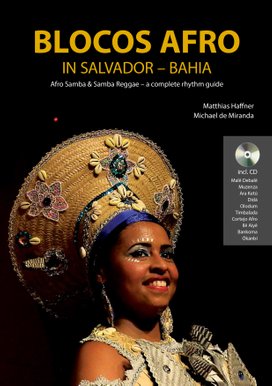 After 30 years of playing, teaching, researching and meeting the greatest masters in Brazil, Matthias Haffner has finally put all of his extensive knowledge about the pandeiro into a package and made it available to everybody. In cooperation with well-known producer David Kuckhermann, Matthias decided to publish a complete tutorial about this amazingly versatile percussion instrument. The result is fantastic: more than seven hours of lesson caught on camera, including precisely explained techniques, hundreds of grooves, tricks and effects on the instrument, traditional and modern styles, history, play-along tracks, on-screen notations, PDF´s and other surprises! The practical wooden USB stick includes the complete course (basics, traditional & modern grooves, advanced techniques) and is available in mp4 format (Mac) or m4v format (Windows).

You can purchase the stick here: 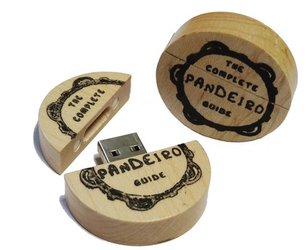 We are two guys living in Berlin and Lisbon and we love percussion. We met in Rotterdam and soon realized that we share a common passion for pandeiro. This drove us to experiment with making our own jingles for them. Through the process of trial and error we started developing sets of jingles for our pandeiros and soon our friends wanted to have them as well. We tried to supply the demand and little by little our small business grew and we started thinking of expanding it. So we built our website. Making first class jingles for some years led us thinking about having our own pandeiro. This also became reality, as you can see. What is next to come we don't know. But one thing is still the same - we are having a lot of fun while working and that keeps us going for more!

A big part of the process of creating a product of superb quality is overcoming all the difficulties this brings. It seems like every time you do something new you have a lot to learn. We believe in learning the hard way, by committing all the necessary mistakes, so that we come out with a more profound understanding of what we are doing and why. If we would focus on making money we would have stopped a long time ago. But since we are not, we are happy to keep on developing our products and learning more about the world and ourselves through this creative process.